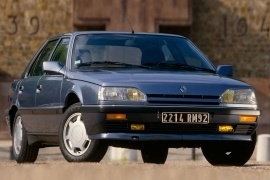 The 1988 version of the Renault 25 is the facelifted variant of the first model introduced in 1986 which had a couple of problems with the electronic systems.
Although this new edition fixes most problems of the car, it also comes with numerous exterior and interior elements, including a new front, reshaped taillights, upgraded front suspension and new interior materials. There were also new engines, which now range between 2.0-liter 103 horsepower and 2.9-liter V6 160 hp. The most powerful engine in this series was a 2.5-liter V6 Turbo which developed 205 horsepower and a maximum speed of 235 km/h. 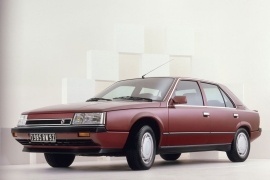 The 1984 Renault 25 was the successor for the Renault 20/30 model and it was a true luxury French car.
Even if it wasn’t a three-box sedan, it was recognized as one of the most comfortable cars from its segment.

After nine years on the market, the Renault 20 had to be retired. It was good for its days but it already started to show its age. Convinced by the successful Renault 16, the French management decided to build the 25 as a hatchback, but with the rear end to mimic a sedan. For that, they hired some prestigious designers for the exterior. Robert Opron (who designed the Citroen SM and Renault Alpine) and Marcello Gandini (Lamborghini Countach, Lancia Stratos) for the interior.

The result was a two and a half box design, with a long roofline. The overall square design of the car was in trend of those times. The grille was made from thin horizontal lines. The plastic bumpers were already a constant presence on the cars and that allowed a lower apron for aerodynamic purposes. In the back, the horizontal taillights were big and visible.

The 25 was offered with luxury features such as leather seats, automatic transmission, and air-conditioning. The front seats were large and comfortable, while the rear seats offered decent headroom and legroom due to its long, 2.72m (107.1”) wheelbase. The large trunk could have been extended by folding the rear bench seatback.

The Renault 25 was offered with both gasoline and diesel engines. The standard gearbox was a 5-speed manual, while a 4-speed automatic was available as an option for specific models. Unfortunately, its front-wheel-drive architecture didn’t make it a winner against the German cars.