The XMOD was the crossover version of the well-known European Renault Scenic MPV.
It was introduced in 2013 as an alternative for the light-SUV category.

Back in the late ’90s, Renault offered a 4x4 version for the Renault Scenic. It was named Scenic RX4 and it was built together with the off-road specialist Magna-Steyr. After the alliance with Nissan, the RX4 version was cut out of the production line. In 2013, the Scenic XMOD was introduced on the market to fill the gap for the buyers who were searching for a light-offroad vehicle, but with plenty of storage room inside.

When compared to the standard Scenic, the XMOD version featured black bumpers and side protections. In the front, the LED daytime running lights were installed in the bumper, where the fog-lights usually are. The honeycomb-style for the grille and a silver plastic shield on under the bumper visually enhanced the Scenic’s look. The 16” light-alloy wheels were fitted as standard and the high tire sidewall ensured a better grip when driven on unpaved roads.

Inside, the XMOD was as spacious as any other Scenic. The digital dashboard featured a display for the main information regarding speed and trip-computer and a navigation system. On the center console in front of the gear stick, there was a rotary knob for off-road use. In the back, the XMOD featured three individual seats that could have been tilted, folded, or completely removed.

Unlike the RX4, the XMOD was front-wheel-drive only but fitted with a special ESP program that acted like a self-locking differential, braking the wheel with less grip. For the engine, the Renault counted for the 1.6-liter turbocharged diesel engine. 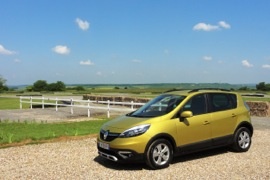