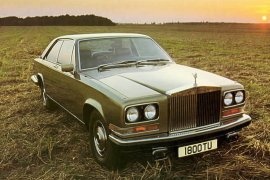 Rolls-Royce introduced the Camargue in 1975, and it was the first post-war car designed outside its British office at the Pininfarina Studios in Italy.
Deemed as one of the ugliest cars ever rolled out from the luxurious brand’s assembly line, the Camargue convinced just 531 customers to buy it. The Silver Shadow from the same era outsold it in a proportion of 56 to one, and its sibling Corniche also overtook it by an eight to one factor.

When Paolo Martin from Pininfarina penned the car, he tried to make something different. But as it was the custom at the Italian office, he started with an already successful project and evolved it. The Camargue’s shape was similar to the Fiat 124 Coupe, but was suitable for the Italian brand was not so pleasant for a luxury brand. It was the only Rolls-Royce that featured a tilted forward radiator by seven degrees. While that was barely noticeable on a small-sized vehicle, it was evident on a massive car such as the Camargue. The overall three-box shape looked like it was missing a set of doors in the back. Its raked-forward rear windscreen looked good, but it was the front that spoiled everything.

Inside, it was business as usual for Rolls-Royce with expensive leather upholstery and wood veneers on the dashboard and door cars. But the dials, switches, and buttons were scrambled around the panel and created a messy appearance.

Under the hood, the carmaker installed a 6.75-liter V-8 engine paired with a three-speed automatic transmission provided by General Motors. Apart from the U.S. market, where the carmaker supplied the Camargue with a fuel injection system, the rest of the world received carbureted engines, which were not so good on fuel efficiency.