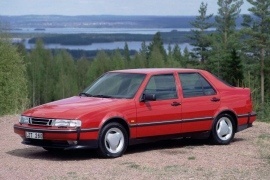 If someone would put in a blender an Italian platform, a GM engine, and a Giorgetto Giugiaro design, the result would be Swedish.
And that was the Saab 9000 CS.

The 9000 was introduced in 1984 but it was upgraded in 1991. The upgrade was so intensive that it could have been named a new generation. But it was the exterior design that showed the connection with the 1984 model.

The Saab 9000 shared some of its body panels with the Fiat Croma and Lancia Thema. The doors were identical. Only the door handles were different. But that’s where the shared components ended. The Sweedish car featured a sleek front with horizontal headlights that matched the company design language. In the back, the U.S. version didn’t feature lights on the liftgate, since the regulations didn’t allow a brake light on them. On the European models, the two taillights were connected via a red light strip across the back panel.

Inside, the Saab 9000 featured a specific dashboard with a big center console tilted toward the driver. The night-panel function shut off all the lights on the instrument cluster and left only the speedometer lit. As usual, the ignition key was placed between the front seats, next to the handbrake, and the gear-stick. In the back, there was enough room for three adult passengers.

The Saab was known for its turbo-powered engines and, in 1992, it introduced the 2.3-liter turbocharged unit that offered sports-cars performance in a family-oriented vehicle. 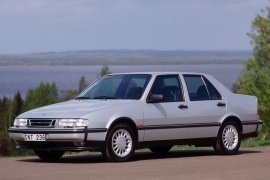 Saab developed a common platform with the Italian carmaker Fiat, which was used for four cars, but then, the Swedish carmaker adapted it to its needs and launched the 9000 in 1984.
In 1984, Saab built the 9000 as a hatchback. Despite its sedan-look, its trunk was opened together with the rear window, leading to a bigger luggage compartment. Four years later, the Swedish company introduced a true three-box bodywork for the 9000. After GM purchased 50% of the Saab in 1990, it decided that its flagship needs a facelift, which appeared in 1994.

The revised version was improved in all areas, from the drivetrain to the car’s look. While the bio-design trend was rising, Saab remained true to its base values and kept the original design lines penned by Giorgetto Giugiaro, but with softer edges and rounded corners. Underneath the grille, the body-colored bumper was reshaped for smoother airflow, with wrapped-around rubber strips. Despite being a premium car, it kept the black door handles and mirrors. In the back, the carmaker installed smoked taillights. Still, the 15” light-alloy wheels looked too small for the car’s size.

Inside, the carmaker offered an option for bucket seats at the front. Unusually for mid-size segment premium sedans, in the back, the carmaker offered an option for a bench for three or two individual high-bolstered seats. The headrests were also oversized compared to other cars on the market. Saab was obsessed with safety, but it deleted the glove compartment when it introduced the front passenger’s airbag.

Under the hood, GM took the decision to install a more comprehensive engine range. The Aero trim level was the only one that fit the Saab’s core values for an inline-four and a turbocharged gasoline unit.