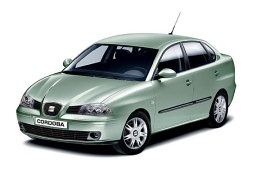 If the first generation of SEAT Cordoba shared a lot of parts with Volkswagen Polo 3, the second generation does the same thing with the fourth edition of the Polo as well as with the Skoda Fabia from which it received multiple engines and the chassis.
This new Cordoba was available in multiple engine configurations, starting with a 1.2-liter 12-valve and ending with a 2.0-liter. The estate and the coupe versions were no longer included in this second generation of Cordoba, the sedan being the only available flavor. Launched in 2003, the export of the SEAT Cordoba in the United Kingdom was stopped in 2006. 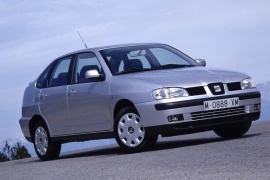 SEAT introduced the first generation of the Cordoba in 1993 and, six years later, it refreshed the entire lineup, which consisted of a two-door coupe, a four-door sedan, and a station wagon.
Usually, a carmaker refreshes a vehicle after four years on the market. SEAT was going through difficult times. Since it was under Volkswagen Group, it had to comply with the German directions. In the end, those decisions proved valuable.

The 1999 model featured a new design, which led to softer edges and some curved lines over the bodywork. Its headlights sported a curve on their upper side, while its predecessor featured rectangular ones. In search of its individual brand image, the carmaker introduced a new badge at the front, surrounded by a body-colored bumper element. The sedan version featured an interesting up-kick behind the rear doors and small triangular side windows. Its tall trunk lid and short rear overhang gave the car a sporty appearance, despite its small-segment size and proportions.

Inside, the carmaker introduced a completely new dashboard with better integration for the ventilation system and smooth vents on top of the center stack. Inside the instrument cluster, SEAT adopted Volkswagen’s style for the dials, with the temperature and fuel gauges installed in the middle and panel’s upper side.

Under the hood, SEAT installed a narrower range of engines when compared with its non-facelifted version. That resulted after the management noticed that customers seldom requested higher-powered engines. 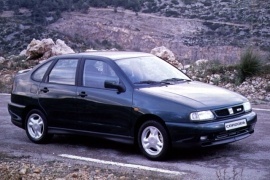 SEAT introduced the Cordoba in 1993 as a three-box sedan version of the Ibiza, and both received a mid-life cycle refresh in 1996.
The Spanish brand started to increase its sales on the European market. While the hatchback was mainstream in some countries, other customers were looking for small-segment sedans, such as the Cordoba. After just three years, SEAT improved its products according to the Euro 2 European emission standards.

Giorgetto Giugiaro designed the 1993 Cordoba based on the Ibiza model. On the facelifted version, the carmaker relied on its design studio to slightly alter the car’s look, but it did it in a good way. At the front, the designers made a smiling front grille with a center slat for the brand’s chromed badge. Its plastic wrapped-around bumper received a pair of rectangular fog lights at the bottom, flanking an additional cooling grille in the apron. The carmaker kept the short, sloped-down trunk lid at the back and, depending on the options, adorned it with a wing. The red taillights were linked together by a red strip interrupted only by the SEAT badge.

Inside, SEAT tried to attract new customers with more standard features such as an air-conditioning system, power steering, and driver airbag. These were not available on the base trim level for the entire lineup. The Spanish carmaker installed a four-spoke steering wheel with an airbag, while the second airbag was on the options list.

SEAT carried over all the engines it could from its parent company and offered a choice of six gasoline and four diesel-powered engines for the small-sized sedan.