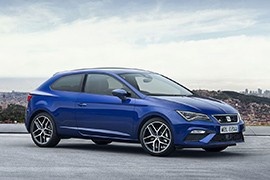 Starting with 2017, the SEAT Leon lineup was increased with the addition of new family members as part of the car’s third generation mid-cycle facelift.
Alongside the regular 5-door hatchback, SEAT saw fit to begin offering various other body versions, like the ST station wagon, ST X-Perience crossover and SC 3-door hatchback. By far the sportiest-looking version, the Leon SC (Sports Coupe) is a classic take on the hot-hatch look thanks to its vastly different exterior design compared to the 5-door version.

The mid-cycle refresh doesn’t comprise too many exterior changes, with SEAT designers and engineers choosing to simply perfect the existing package without spoiling the original lines of the pre-facelift model. Most of the exterior changes revolve around the front of the model, which now features a revamped, slightly wider engine grille and redesigned headlight clusters. Front and rear bumpers are all-new and now come with LED technology that also includes the turn signals and fog lights. On the inside, the new center console is made from improved materials, while an electric parking brake is now part of standard equipment. The diesel engine lineup starts with a 1.6-liter diesel with 90 horsepower and goes all the way to the 2.0 TDI with 184 horsepower. On the gasoline side, the powertrain lineup starts from a 1.2-liter with 110 horsepower all the way to a 1.8-liter TSI engine with 180 horsepower. 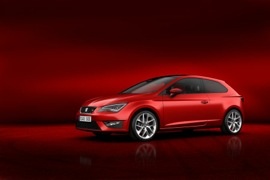 Since the first generation, the SEAT Leon was available only as a 5-door hatchback.
But that was changed in 2013, with the introduction of the 3-door version.

Shorter, lighter but with a roomier interior, the third generation of the SEAT Leon was the second car based on the MQB platform, which was used by more vehicles within the Volkswagen Group. For the SC version, with three doors, the car featured a shortened wheelbase by 3.5 cm (1.4”).

SEAT was assigned by the Volkswagen officials to represent the sportier and more affordable cars built by the group. Its design was more aggressive, with angular headlights and sharp edges. They were offered with full LED and the color temperature was 5,500 Kelvin, similar to that of daylight. The front bumper was different than the one offered on a standard Leon with 5 doors, and it featured a trapezoidal lower grille. On the sides, a sculptured profile on the doors and rear fenders enhanced the dynamic look of the car.

The Leon SC featured a clean interior, with simple lines and uncluttered center console. The instrument cluster featured, depending on the engine and trim level, four analog dials and an LCD information display between the tachometer and speedometer. On the center console, SEAT Leon SC offered a multimedia system with a 5” display for the entry-level. An option of up to 5.8” unit with navigation system was available.

For the engine bay, the Spanish brand offered five choices: three with gasoline and two diesel. All of them were turbocharged. They were mated either with a 5- or 6-speed manual gearbox or with a DSG (dual-clutch) automatic.