Despite having an identical name, the Chinese-only Skoda Kamiq doesn’t have that many things in common with its European counterpart.
That said, the international-market Kamiq is also a sub-compact crossover that will accompany the larger Kodiaq and Karoq as part of a Skoda crossover/SUV offensive. Not as a coincidence, all model names start with a K and end with the letter Q. Shown officially at the 2019 Geneva Motor Show, the new Kamiq will go against established models like the Renault Captur or the Nissan Juke.

Just like its two main rivals, the smallest Skoda crossover is a FWD-only affair, and despite sharing the same platform as its Chinese Doppleganger it’s a lot smaller, probably to mingle more efficiently on busy European streets. The model has a length of 4,241 mm, a width of 1,792 mm and a height of 1,531 mm for better improved head room and a commanding view of the road for the driver. Oddly enough, despite being shorter than the Chinese Kamiq, the international model has a longer wheelbase, so passenger knee room should be plentiful despite its sub-compact exterior size. The engine lineup consist of four powertrains in total, with three- and four-cylinder gasoline ones and a diesel four-cylinder version. 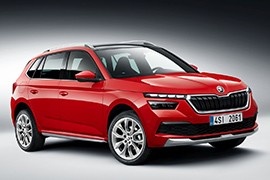