Brabus was already a well-known tuner for Mercedes-Benz, and it agreed to work on the little SMART lineup, and one of their best versions was the Roadster.
After parting with Swatch, Mercedes-Benz took the SMART problem into its hands and tried to make it a premium city vehicle, but the results were under the expectations. SMART introduced the Roadster version to get more attention, and then it offered it in a Brabus version.

The little city vehicle was based on the same platform as the SMART ForTwo, but longer and lower. It was like a go-kart with headlights and number plates. The car sported unique light-alloy wheels that resembled the AMG ones with a six double-spoke design. On the sides, the sculptured door panels left some room for the air-intakes to cool the engine. Unlike the regular coupe version, the Roadster featured a power-retractable canvas-roof. The vertical rear windscreen was not the best aerodynamic solution but created a sportier look for the little car.

Inside, Brabus put its name on the dials in front of the driver and installed an additional set of gauges on top of the dashboard, tilted toward the driver. The sport bucket seats were different than those fitted in the non-Brabus version and featured higher bolstering.

Like the rest of the SMART range, the engine was in the back. It was an inline-three fed by a fuel injection system and a turbocharger that pushed the power to 100 hp. That was more than enough for the little vehicle. 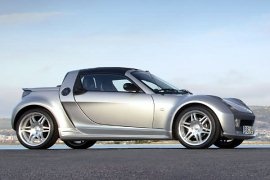