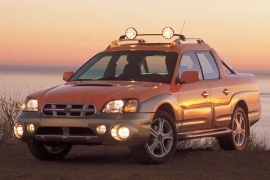 Named after the notorious off-road race series, the Baja was a new range of Subaru crossovers built on the same platform as the Outback.
Most of the Baja championship race-cars were pickups, and Subaru launched the new model in that shape. It wasn’t easy to transform a unit-body construction into a pickup, but the Japanese engineers made it and made it well. But the Baja didn’t last too long, and, in 2006, Subaru pulled the plug.

Subaru managed to keep the unibody construction for the Baja from the Legacy Wagon/Outback model, even after it cut the trunk area and converted it into a small bed. The bodywork was wrapped around by plastic moldings, and at the front, it featured two large fog-lights on the outer side of the front bumper. Its hood-scoop was functional and provided cold air for the intercooler and to feed the turbocharged engine.

Inside, it was similar to the Legacy lineup, but with different trims that mimicked aluminum trims on the center stack and dashboard, depending on the trim-level. Subaru carried over the Legacy Sedan rear seats since they didn’t have to be split-folding or folding at all.

Under the hood, Subaru offered the Baja with the same engines as the Legacy Outback. They were paired as standard to a 5-speed manual while a 4-speed automatic was on the options list.