It was supposed to be the cheapest car worldwide, and its closest relative was a rickshaw.
The only difference was that it featured a windshield wiper and four wheels.

India’s road network was the second busiest in the world. Also, the average income was very low. The Indian Tata company imagined a car that could transport four adults in better conditions than a rickshaw. And the result was incredible by any standards. The price was affordable for many, but the actual sales were a disaster. Eventually, Tata pulled the plug on the project, and it was a big money loss for the company.

The egg-shaped vehicle featured short overhangs both front and rear. Even the headlights were installed upright. On the sides, behind the rear doors, it featured two air-intakes that led to the engine compartment, which was located under the rear trunk. The carmaker installed only one windshield wiper and a single door-mirror on the driver’s side to cut costs.

Inside, there was a curved-shaped dash panel with an open storage area in front of the passenger. The dials were placed in the middle, on top of the center stack. That solution was adopted to make an easier conversion for the left-hand-drive versions. On the instrument cluster, there were two dials and a small LCD.

Tata installed a 2-cylinder, four-stroke engine under the rear bench and trunk. It was paired to a 4-speed manual gearbox and sent the power to the rear wheels. 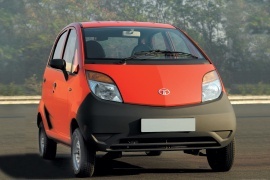