According to the carmaker, Tata introduced the Sumo nameplate in 1994 for a rugged multi-use-vehicle or MUV.
India was the eighth country globally by its size, and its road network was not properly developed when the local carmaker introduced the Sumo. It built the vehicle, judging by what the customers need, and this was a great answer. It was a vehicle built on a robust chassis, with rear-wheel drive and able to carry ten people inside. It went through two updates before 2007 when the Sumo Victa was introduced to the market. While the main difference was the turbocharged diesel engine, some other modifications were made to keep the car competitive on the market.

From the outside, the Sumo Victa marked a return of the squared headlights. Its predecessor, the Sumo Spacio, featured round headlamps. Its flat-panels for the bodywork, with a steep and flat windshield, left no room for interpretation. It was built for a purpose, not for winning a design contest.

Inside, the carmaker installed two seats at the front, a bench in the middle, and two side benches in the trunk. Thus, it could easily fit ten occupants, including the driver. But there was no guarantee that its users didn’t try to fit more, and the carmaker knew that. In the back, a large, side-opened door granted easier access for the rear passengers. Tata set the air-conditioning on the options list, but the power steering was fitted as standard.

Under the hood, Tata introduced a newly developed 3.0-liter turbodiesel, which provided up to 85 hp. It was paired to a 5-speed manual transmission. It was available with either rear- or all-wheel-drive system. 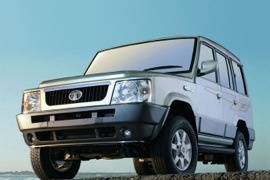