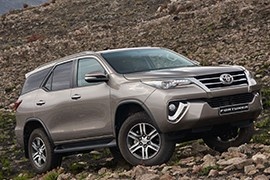 When your name is Toyota and you have one of the best pickups in the world, you can slam an SUV bodywork on that chassis and call it a day.
Just name it Fortuner (not For Tuner) and sell it well.

In the past, most of the SUVs were capable 4x4 vehicles which could go virtually anywhere. Since they were body-on-frame system, with separate chassis, all the modifications needed were easier to do. But that doesn’t work with the unibody construction on the modern SUVs that usually cannot tackle more than a dirt road. The Fortuner is one of the vehicles that was built “old school” but with a modern design in 2015.

The second generation of the large SUV applied the same recipe as the previous: took the chassis from the Hilux pickup and slammed a bodywork on it. The design had some similarities in the design concept with the Toyota Corolla, mostly on the headlight shape. On the side, there was a strange descending line from the C-pillar to the rear. The idea was to make the car look better, not bald. And the result is fine.

Inside, there was room for up to seven passengers and still had some trunk space. The dashboard design was very interesting, with a display in the middle and a big touch-screen display on the central console. The instrument cluster was a mix of round analog dials and a small display for the on-board computer. 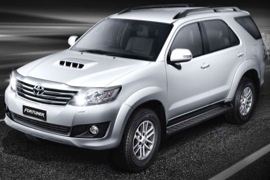 The first generation of the Toyota Fortuner was introduced in 2004 and, over its 11 years of production time, it was refreshed twice: in 2008 and 2011.
The latter was the last before the second generation.

Based on the same chassis with the well-known Toyota HiLux, the Fortuner took its name from the word “Fortune”. It was a vehicle that searched for its luck in countries where poor road conditions required a rugged, reliable, suspension, a known attribute of the HiLux.

The facelift brought more chrome and new headlights to the Fortuner. The high ground clearance and the tall greenhouse made the car looks massive. From the side, the big C-pillar was not needed for structural integrity since the car was chassis-based, but it was needed for roll-over crash-tests, mandatory in some countries where the Fortuner was sold.

Inside, the Fortuner offered room for up to seven passengers. The last row featured side-mounted folding seats for two adults, but without offering too much space for them. The dashboard was carried over from the HiLux. Depending on the trim level, it was available with leather seats, automatic climate control, and an infotainment unit with navigation system.

For the engine compartment, the Fortuner was offered with a 3.0-liter turbodiesel engine. It was mated to either a six-speed manual or a 5-speed automatic. For the suspension, it kept the front wheel independent system and a rigid axle with leaf springs in the back.