Toyota remained true to its believes when it designed the 2020 version of its well-known Land Cruiser/Prado.
There were not too many car-makers to build an off-road vehicle like that.

The Land Cruiser started to be one of the last dinosaurs from the automotive industry. It was still a body-on-frame construction, with rugged suspension and able to go effortlessly over harsh terrain, even if most of its buyers were driving it on tarmac most of the time.

Since the introduction of the Land Cruiser 150 was in 2009, the exterior design was not dramatically changed. The new update was not only for its look but for the technical part as well. But it had to look different. The headlights and the whole front area was changed. The bumper was extended and curved, for better pedestrian protection. The Prado had moments when it had a chromed grille and when it had it black. For 2020 is black again with the Black Pack option.

Inside, it was fitted with a new infotainment system able to connect via Apple CarPlay and Android Auto. The car-maker said that it was a new one, with a faster response. It occupied the whole upper side of the center stack and looked much better than the flat and vertical system used before.

Under the hood, the Land Cruiser Prado succeeded to offer a Euro 6d engine to comply with the European regulations. It was an updated version of the 2.8-liter turbodiesel engine and it was paired to a 6-speed automatic gearbox fitted as standard. It was a weird decision since all its predecessors featured a standard manual transmission and an automatic fitted as an option. 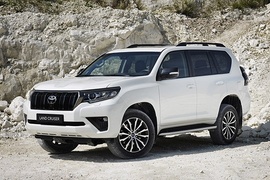