The Previa was one of the strangest MPV on the market, with seating for seven, a front-mid engine and rear-wheel-drive.
The third generation was launched in 2006 as a 2007 model with a different approach.

While the Europeans looked more for the European brands if they wanted an MPV, in other parts of the world the Previa/Estima had a different impact on the market. For their home-market in Japan, the JDM spec was offered even with a hybrid drive.

The outside look was made to fit into the main Toyota brand image, with a large V-shaped grille and headlights. The overall look was kept from the second Previa generation, but more stylish. Angular shaped and with flat curved surfaces, the car looked more like an Edge-design era, a trend that was already gone in 2007.

Inside, there were more options for the number of seats and the way those were placed. The last seat row could have been folded and stored under the flat floor. Thus, the middle row could have been moved back and created more legroom. The rear sliding doors were electrically powered, as an option, or standard depending on the trim level.
The instrument cluster was particularly interesting, with analog dials but placed further back on the dashboard. The 3D appearance was not a usual design for the dashboards, but it worked well on the Estima. 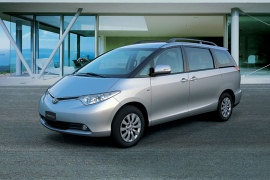