Toyota tried to make a more affordable version of the Prius and introduced the Prius C in 2012, which was updated in 2015 and 2017.
The Japanese carmaker was the starter of the hybrid revolution. While in the beginning, it was the only offer on the market, later on, more and more brands joined the trend, but Toyota kept trying to stay ahead. To compete against cheaper options, it built the Prius C, a more affordable car to buy, and offered one of the best fuel efficiencies on the market.

With the 2017 facelift, the carmaker brought a new front bumper and different headlights. Toyota removed the daytime running lights from the bumper’s side scoops, which they shared the space with the fog lights, and migrated inside the headlamps. On the sides, the carmaker installed black plastic moldings around the wheel arches, where it fitted standard 175/65R15 tires.

For Toyota, it wasn’t easy to cut costs and still kept the same quality standards. The carmaker chose to use lower quality plastics inside the cabin but kept the same up-market infotainment systems and the same drivetrain as in the regular Prius. For the 2018 model, the Prius C featured a standard backup camera for the entire range.

Under the hood, Toyota installed the same 1.5-liter engine and an electric motor plus a 0.9 kW NiMh battery pack as its predecessor. It was a cheaper but trustworthy solution. After all, all it mattered was the fuel efficiency, and with an average of 46 mpg (5.1 l/100 km), the Prius C was one of the best offers in its class. 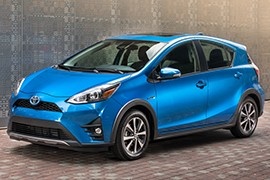