The fourth generation of the Toyota Yaris was unveiled simultaneously in Japan and Europe, signifying once more that its based on Toyota’s latest New Global Architecture (TNGA), developed with the demands of city dwellers around the world in mind.
Its predecessors were called Vitz on the Japanese market, but a downturn in sales prompted Toyota to rename it Yaris everywhere, including on its home market.

Using the GA-B platform for the first time has allowed the new Yaris to shrink in exterior size while offering more interior space. Unlike other rivals, Toyota has reduced the model’s length by 5 mm, while the wheelbase has been increased by 50 mm for more passenger space and better agility during city driving and parking. The much sportier design also benefits from a 40 mm reduction in the car’s height, with wider front and rear track widths complementing the tauter overall design. The fourth-generation Yaris is also 50 mm wider, generating more interior space for both front and rear passengers, who also sit lower in the cabin than before. Toyota’s fourth-generation hybrid technology also makes its debut in the Yaris 1.5 Hybrid, which uses a 1.5-liter three-cylinder Atkinson engine and a small electric motor. The nickel-metal hydride battery of its predecessor has been replaced by a lithium-ion one, which is 27 percent lighter. 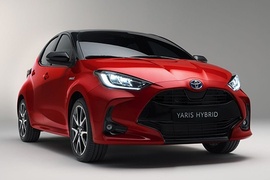