After ending the production of the 1991 model Griffith in 2002, the British car-maker TVR went into silence for over a decade about their flagship model and, in 2017, it unveiled the next generation.
It was unveiled at the Goodwood Festival of Speed. It took the center stage and made the wealthy guests open their check-books. But the car was to be released as a series model in 2020. Due to the pandemic situation and the fact that there was no factory, the car was still gathering orders and nobody could tell when they will be delivered.

Back to the car itself. The 2020 Griffith featured a new, bold design with LED headlights and a sculptured front area. The wide grill was placed lower, with two side air-intakes to enhance the aerodynamic. An arched roofline with a short 2-seat cabin with a large shelf for luggage in the back. On the sides, behind the front fenders, the concept-car featured the exhausts on each side. Most probably those will be moved to the back, under the big diffuser, since the safety regulations forbid the side exhausts.

Inside, the Griffith featured a TFT display for the instrument cluster and a touch-screen display for the infotainment system. Since TVR designed its vehicles in a different way than other sports-cars manufacturers, it showed an interior with a different layout for buttons and controls. The driver was surrounded by the center console. The entire car was focused on the driver. It was a true driver’s car.

The engine was a 5.0-liter Cosworth V8 mated to a 6-speed manual. The 50:50 weight distribution contributed to the car’s handling along with the independent suspension in all corners. The extensive use of carbon-fiber elements led to a low weight of only 1250 kg (2756 lbs). 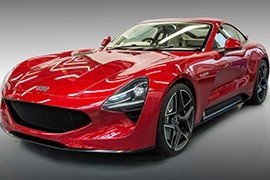