The first Volkswagen Golf GTD came on the market in the ’80s.
It was the time when people were very happy to see a diesel on the road. Its lower fuel consumption was very convincing. It was 1982 when the first diesel version of the GTI was introduced, wearing the GTD badge. The latest Golf GTD was launched at the same moment as the eighth Golf GTI.

The 2020 Golf GTD has received numerous features to distinguish it from other Golf versions. The full LED headlights are standard and a silver line spans toward the top of the hood. Just to know who just overtook you, the GTD has a dual exhaust pipe on the left of the car. The GTI has one each side and the GTE doesn’t have any visible pipes at all. On top of the vehicle, in the rear, a longer spoiler extends the roofline so the car looks lower than the rest of the Golf range.

Inside, the grey pattern is kept for the diesel-fueled hot-hatch, compared to the red used in the GTI and green for the GTE. An infotainment unit with a 10” touch-screen dominates the central console. This system has the ability to communicate with other vehicles in traffic to exchange information regarding the routes. The system, known as Car2X, will have full functions available when the whole infrastructure in cities will be adopted. 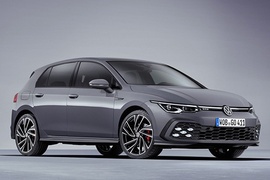