The electric revolution made the German carmaker think of a regular vehicle with an electric motor or a completely new range.
The ID nameplate was shown on the production model ID3, which was a compact-segment electric vehicle. It was named the “Golf of the electric cars,” and soon it got traction on the market. Volkswagen already had a few electric vehicles such as the e-UP! or the e-Golf, but they aimed higher. The ID3 was a good starting point, but the real deal appeared to be the ID4: a long-range electric SUV.

Designed in-house, the ID4 showed a muscular stance with a high body shape, specific for an SUV. At the front, it showed a similar fascia as the ID3, with a narrow grille and teardrop-shaped headlights with run-around daytime running lights. The ascending beltline continued to the raked C-pillar. In the rear, the taillights followed a similar shape as the headlights.

Inside, the vehicle’s dashboard relied mostly on two displays: one as an instrument cluster and the other for the infotainment system. The minimalist design trend followed on the dashboard’s look, with flat and clean surfaces. There were just a few physical buttons for the climate control unit. Its high-bolstered front seats were designed for long journeys, with good lateral support, while in the back, the car featured a 3-seat split-folding bench.

At the launch, Volkswagen offered the ID4 with a 201 hp electric motor that powered the rear wheels. Later on, the powertrain range was completed by a 302 hp, all-wheel-drive version. 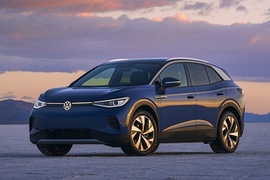