Volkswagen upgraded the sixth generation of its small-segment Polo in 2021 and improved mostly the car’s interior, but didn’t forget the exterior look or the drivetrain.
With 20 million units sold, the Volkswagen Polo was a huge success for the German brand, and the 2021 model came with up-scale features. Even though it was not that small-segment budget car as it was when the first generation went on the market, its core customers asked for more technological improvements. It even came with partly automated driving.

With its standard LED headlights, the facelifted sixth generation of the Polo offered a new front fascia. An LED strip for the daytime running lights crossed the car’s front from side to side and enhanced the car’s look. The carmaker also installed a new bumper with a more aggressive styling on the lower grille. Its taillights were full-LED. As an option, the carmaker offered Matix headlights.

Inside, the Polo featured a standard 8” instrument panel with an option for a 10” screen behind the steering wheel. For the infotainment system, Volkswagen installed a standard 6.5” touch-screen on the center stack, with an option for up to 8”. There were four trim levels named Polo, Life, Style, and R-Line. Even the base-level offered a lane keep assist, while the Adaptive Cruise Control was also available.

For the drivetrain, Volkswagen announced only gasoline engines. A 1.0-liter engine was available in three power versions: 80 cp, 95 cp, and 110 cp. A 1.0-liter LPG version was announced for fleets, with 90 hp. 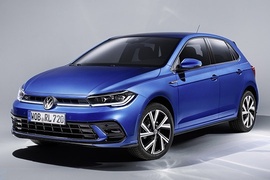