The Polo sedan was a good choice for the emergent markets, for the families that didn’t want to share the cabin with their luggage compartment.
Small, nimble, and light, the Polo sedan was a great choice for countries where the three-box version was considered more upmarket than the hatchbacks. In the ASEAN market, Russia, and specific market, Volkswagen offered a three-box version for its well-known Polo from the fifth generation.

From the outside, the Polo Sedan featured the same front fascia as the rest of the range, with angular-looking headlights and a two-slats grille design with chromed accents. Depending on the trim level, the aerodynamically profiled bumper featured a pair of round fog lights installed on the outer section. In the middle, the carmaker installed an additional grille to cool the engine. The three-box version featured a third triangular window behind the rear C-pillar and a sloped D-pillar from its sides. Its taillights were mounted only on the rear quarter panels.

Inside, the Polo Sedan offered adequate space for four passengers but with limited legroom for the rear seat occupants. The carmaker installed a pair of seats designed for comfort rather than for spirited driving at the front. While the dashboard design was similar to the sedan version, but with a slightly different instrument panel design, especially for the tachometer and speedometer.

Depending on the market, the Polo Sedan was available either with two gasoline engines or a 1.5-liter turbodiesel. 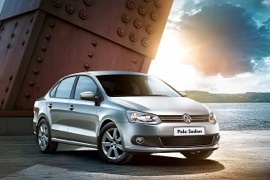