In 2008, Volkswagen decided to revive the Scirocco name.
Like its predecessor, it was based on the same platform with the Golf but offered a sportier look. It was one of the sexiest cars made by the German brand.

The first generation of Scirocco was introduced in 1974 and it was followed by a second-generation in 1981, which remained on the market until 1992. It was overlapped for a few years by its more powerful but less successful brother Corrado, between 1988 and 1995. After that, no other sport-compact car was offered by Volkswagen, until 2008.

Despite the bad world economy, the third generation was introduced in 2008, but it was well-received by the market. In 2014, it was refreshed. It featured new LED strips inside the headlights and a new bumper with new fog-lights inside. In the back, the facelifted version featured a small line over the tailgate. The new taillights design was enhanced by LEDs.

The interior featured sport-bucket seats and leather sport steering wheel carried-over from the Golf GTI fitted as standard. There were more new configurations and a new Dynaudio sound system for the infotainment unit, that included the sat-nav. 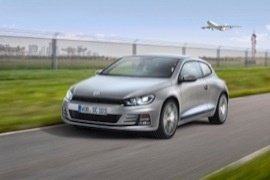