The Touareg’s flagship is the R version, which also becomes the most powerful plug-in hybrid in Volkswagen’s range.
The combined output is 462 hp, obtained from a combination of a turbocharged 3.0-liter V6 and a 100 kW electric motor. The combined torque is 700 Nm (516 lb ft). A 14.1 kWh lithium-ion battery stores the energy needed for the electric motor and it is mounted under the luggage compartment. Transmission is via an 8-speed gearbox and a transfer box that transmits power to the front and rear axle through a Torsen differential. Maximum 70% of the torque can be sent to the front axle and up to 80% to the rear.

The 2020 Touareg R is the result of the Volkswagen Motorsport department led by Jost Capito. The former McLaren executive, who was also formerly responsible for VW’s WRC program returned to the german carmaker and transformed the big SUV into a faster vehicle, able to tackle mud, sand and smooth tarmac.

From the outside, a black theme is applied where chrome used to be on the grille, sides and rear bumper. Only the tailpipes remained polished and shiny.

Inside, the traditional luxury features from the Touareg can be found, but some touches of R-customization may be found. The Innovision Cockpit comes as standard in the Touareg R. It consists of the digital instruments and the infotainment system screen. 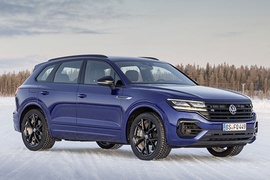