The third generation of the Touran was introduced at the 2015 Geneva Motor Show.
The MPV was more stylish than before and it featured more comfort and safety amenities.

Like most of the Volkswagen range, the Touran was developed on the MQB platform. It was fitted with an automatic post-collision braking system, adaptive cruise control, and city emergency braking. It also featured pre-crash proactive protection, side assist, and rear traffic alert.

From the design point of view, the Touran featured a grille inspired by its three-box sibling, the Jetta. With its chromed longitudinal lines which were stretched from one headlight to another, it made the MPV look wider. The Touran was fit between the Golf Plus and the Sharan.

Inside, there was room for seven passengers with seven individual seats in the middle row, which could slide and tilt. The last row was fit for children. When folded, the second and third-row made a flat platform that expanded the trunk space. The dashboard was minimalist, in the Volkswagen style. The infotainment system supported Apple CarPlay and Android Auto connectivity.

For the drivetrain, the Touran was offered with a choice of three versions of turbodiesels and three turbocharged gasoline units. Most versions came mated as standard with a 6-speed manual, while for the top versions (one diesel and one gasoline) a 7-Speed DSG (dual-clutch system) was fitted as standard. 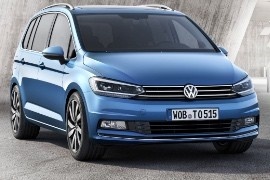