While the French carmakers were the segment leaders, Volkswagen tried hard to catch-up and offer family-oriented vehicles fit for long trips and big loads. The Golf MKV platform was one of the best on the market, and that convinced the carmaker to use it when it designed the CrossTouran. It had the same underpinnings as the CrossGolf Plus, and thus, it was easier to make it happened. The 2010 Touran already had the new headlights that resembled those installed on the Golf VI, and that made it less bland. In the Cross trim-level, the carmaker added plastic moldings on the wheel arches and supplementary protections on the lower side of the bodywork.

Inside, the CrossTouran featured a specific upholstery, which came as a package with the leather-wrapped steering wheel and gear-stick. The dashboard design was the same as the one installed in the regular Touran, which was different than the one from the regular Golf. Inside the instrument cluster, the carmaker installed two big dials for the speedometer and tachometer and smaller gauges at their bottom for fuel-level and coolant-temperature.

Under the hood, the CrossTouran received a range of new, downsized engines, but more powerful, thanks to the turbochargers technology. The base version featured a 1.6-liter turbo-diesel unit, while the sportiest version received a 1.4-liter turbocharged gasoline engine. 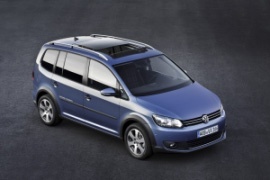