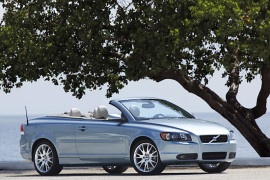 The second generation of the C70 was introduced in 2005 at the Frankfurt Motor Show.
Unlike its predecessor, which was available as a coupe and convertible, the 2005 model was a coupe-cabriolet.

Owned by Ford in 2005, the Swedish car-maker Volvo tried to make a difference in the premium segment with the C70. Unlike the CLK, from Mercedes-Benz, or the 3-Series from BMW, it offered a retractable hard-top. It was its strong point but the soft point was the platform, which was shared with the Focus.

The C70 looked very good either if it was opened or closed, unlike other convertibles on the market that didn’t look so appealing when they were with the top up. The black radiator’s grille was mounted forward, relatives to the headlights. In the back, the “Volvo shoulders” over the rear wheels were already a trademark for the Swedish brand. In the back, the taillights resembled the design of those found on the S80. The car’s bodywork was produced by the Pininfarina Swedish branch.

The interior was fit for four adults with limited legroom and headroom for passengers over 6 ft (180 cm). With minimalist Swedish design for the dashboard, the C70 offered a clean look with flat and curved surfaces. The clean look of the super slim “floating” center stack and center console, gave airy feeling. With the roof up, the trunk space was 17 cu-ft (480 l), and with the roof folded was just seven (200 l).

The engine choice was wide, with a choice of three gasoline and four diesel versions. The car was fitted with a 5- or 6-speed manual, or a 5- or 6-speed automatic, depending on the engine.