The Volvo S60 is as global as a vehicle could be.
The brand was from Sweden. Its owners were from China and the assembly plant in the U.S. And it was built for the Premium market.

A minimalist design both on the outside and on the inside, a clear brand image with its horizontal T-DRL in the headlights (T was from the Nordic god Thor) and only state-of-the-art engines and features.

The outside look is somehow similar to a shrunken S80 with which it shares the same SPA (Scalable Product Architecture). The rear shoulders over the fenders were typical for a Volvo. But it was more than a shorter S80. On the front, the bumper featured big air-scoops in front of the wheels, to cool the brakes. It was a sign of performance. And for most versions, it was true.

The interior was a carry-over from the V60. Usually, the station-wagon is launched after the sedan. In this case, the sedan was launched later. On the center console, there was a big infotainment unit touch-screen. The instrument cluster was another TFT display, which could have been configured by the driver to show the information needed, where it was needed.

But the biggest philosophy change was under the hood, where the Volvo left all the diesel engines out. Under the hood, there were only turbocharged gasoline engines and, for the top-of-the-range T8, a hybrid system with electric motors. 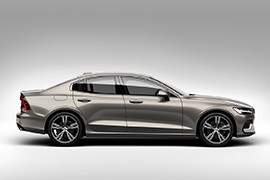