It was the fastest SUV on the Nurburgring with a lap-time of 7 minutes, 51.7 seconds. It was faster than many other sports cars.

Alfa Romeo was back on track with the introduction of the beautiful Alfa Romeo Stelvio. It was named after the Stelvio Pass, from the Italian Alps, between Italy and Switzerland, and evoked its ability to climb the highest roads and still be sporty as an Alfa. The Italians built the Stelvio on the same platform as the Giulia, which also established a class’s lap record on the Nurburgring.

Centro de Stile Alfa Romeo made the design by a team led by Alessandro Maccoli. They imagined a shape that would be recognized as an Alfa Romeo due to its specific front end but still looks like an SUV. Its sharp, angry-looking headlights and the deep, big “shield” in the middle of the grille expressed power and performance. On the hood, the car featured exhaust vents for the engine. Its fluid side profile with sculptured door panels inspired a fast vehicle. In the back, four exhausts confirmed that it wasn’t just a regular SUV.

Inside, Alfa Romeo designers placed a binocular-shaped instrument cluster with the tachometer and speedometer’s needles starting from a low (6 o’ clock) position. The carmaker installed a TFT display for various information from the on-board computer between the two large dials. Unlike other versions of the Stelvio, the Quadrifoglio featured carbon-fiber trims on the dashboard, center stack, door panels, and center console.

Under the beautiful SUV, bodywork laid a carefully engineered drivetrain powered by a 2.9-liter, twin-turbo engine made by Ferrari. The 50-50 weight distribution and the adaptive dampers contributed to the car’s performance. 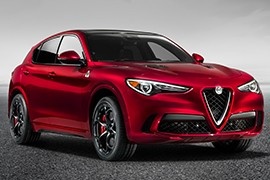