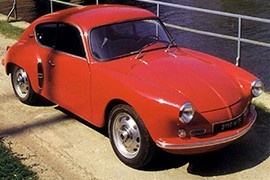 Alpine’s first car was the 106 Coupe, a sports car that won the Mille Miglia race and proved that a light vehicle with a small engine could beat more powerful sports cars at their own game.
Light, nimble, and with a tiny engine in the back, some might could think that it was the French Porsche 911, but it was introduced nine years before the well-known German sports car. In the early ’50s, a Renault dealer from Dieppe – France took a Renault 4 apart and used it to build a light, nimble car. In 1955, the Alpine A106 was ready to enter the world.

Its fiber-glass bodywork was lighter than a steel one, but it was more difficult to build it, especially with all those rounded shapes. The car’s front featured two round headlights and a bow-like front panel. Its metallic bumper was mounted on fiber-glass support. From its sides, the car showed a steep, slightly curved windshield. Its greenhouse was sloped toward the end of the car in an arched line. The rear fenders were wider than the rest of the car and sported an air-intake at their front, used to channel the air to the engine, which was mounted in the back.

Inside, the little A106 featured two seats at the front and a small bench in the rear. Its instrument panel featured a speedometer and a few gauges but no tachometer. Between the front seats, Alpine installed the gear-stick.

The engine was a small four-cylinder unit designed by no other than Amedee Gordini, also known as “Le sorcerer” (the wizard). With an independent suspension in all corners and only 540 kg (1,190 lbs), the Alpine A106 proved to be very fast and reliable, especially on winding roads.