Alpine is part of the Renault carmaker, but it is focused only on performance cars.
But it is more than what M is for BMW or SRT for Dodge. It made completely different cars than the rest of its owner’s lineup.

History says that Alpine snatched the Monte Carlo Rally victory from other sports cars makers back in the ’60s. But over the years, the Alpine brand died after it was included in Renault and transformed into the Renault Sport brand. Yes, it still made sporty cars and featured different engines and suspension than the rest of the Renault range. Yet, it didn’t have a specific model. When Renault decided to revamp the Alpine brand, it created the A110, which resembled the original Alpine sports car: light, mid-engined, with round headlights, and a unique-shaped, fiber-glass bodywork.

In 2021, Alpine returned with a refreshed lineup, but most of its upgrades were on the interior, trims, and suspension.

Inside, the carmaker placed Sabelt seats with microfiber upholstery. On the dashboard, a 7” infotainment system was a clear sign of modernism. Moreover, it featured Android Auto and Apple CarPlay connectivity. The general sporty atmosphere was emphasized by the aluminum sport pedals enhanced by leather and aluminum trims from the cabin. 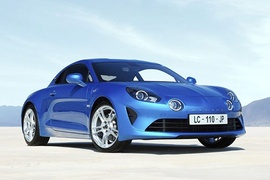