Unlike its sibling, the A110 GT, the S version was made for those who asked for more, and Alpine was eager to provide them a provocative sports car.
With a rich motorsport history behind it, the Alpine brand was revived by Renault in 2017 and carried over many of its ancestors’ attributes.

Designed with performance in mind, the A110 S features a similar bodywork with the A110 GT. It sported the same four-headlights layout with round light circles. Its pinned-out nose sported the characteristic center rib that crossed the trunk’s lid from bumper to windshield. In the apron, the carmaker placed a broad black grille flanked by a pair of scoops that channeled the air to the sides of the vehicle. Thus, they reduced the drag coefficient.

The S badges that adorned the side sills and in the car’s rear promised a sporty experience. The carmaker also installed a functional wing at the back of the vehicle, creating 81 kilos (179 lbs) downforce for high-speed cornering situations. However, even though it had a mid-mounted engine, it didn’t have side scoops as other carmakers preferred.

Inside, a pair of sport bucket seats with integrated headrests and high bolstering featured the Alpine badge embroidered on the front of the seatbacks. The carmaker placed an aluminum strip on the dashboard that crossed the panel from side to side, while atop the center stack, it placed the infotainment display. As an option, the Microfiber Pack and Racing Seats added more flair to the interior.

Behind the cockpit, the carmaker placed the same 1.8-liter turbocharged engine beefed up to 300 hp (304 ps) paired with a seven-speed automatic (dual-clutch) gearbox. Its 44:56 weight distribution allowed a predictive, oversteered car behavior. 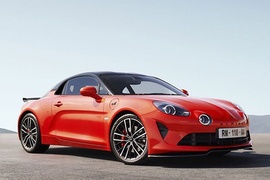