After financial troubles, the Artega brand was back at the Frankfurt Motor Show in 2015 and presented its new creation: the Scalo.
Named after a former glorious racing horse, the Scalo was based entirely on the Artega GT chassis left after the customers withdrew their orders. In 2006, Artega said that it would build 500 units yearly, producing just 153 units. With so many parts in the storage, the new owner tried to make use of them. It invested in a new drivetrain and unveiled the Scalo.

Since the Scalo’s bodywork was carried over from the GT model, they looked very similar. It even sported the air-intakes on the rear fenders, which were needed for the internal combustion engine. An electric vehicle does need some cooling, but not that much. The clear-lens headlights were slightly enhanced at the front, but they still resembled the one from a Porsche Cayman.

Inside, the car featured the same dashboard, which looked very similar to a Volkswagen panel. Before closing the company when it filed for bankruptcy, its former owner already had enough spare parts for more vehicles, and that included some Audi seats converted and adapted to the Artega’s design.

The Scalo featured a pair of electric motors that powered the rear wheels. Its total output reached 300 hp. Artega found a very interesting solution for the battery system. Apart from the lithium-ion packs, it featured supercapacitors that provided instant power after a braking period, such as when it pushed out from a tight corner. The car’s range could get up to 402 km (250 miles). 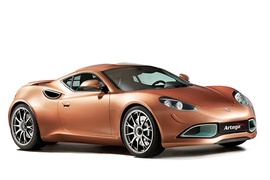