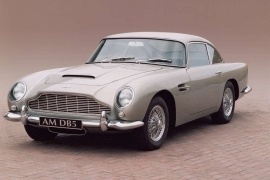 This is the original James Bond car.
The DB5 marked the beginning of the cooperation between the British brand and the Her Majesty super-spy hero.

The DB5 used in the film, with the chassis number DP/216/1 was stolen in 1997 and was still missing in 2020. The legacy of the DB5 was larger than the “Goldfinger” or the “Cannonball Run” movies.

Like the DB4 before, the DB5 was designed by Carozzeria Touring Superleggera from Milan. The long hood and the enclosed headlights behind a clear glass were a novelty for the market in 1963, when the car was introduced on the market. With two side-vents on the front fenders and the sloped back, the DB5 was a true Granturismo. The central-mounted log-nut with the wired wheels offered a classic look that was hard to achieve by other car-makers from that era.

Inside, the DB5 featured a luxurious interior and a fighter-plane style instrument cluster. Seven dials with metallic rings around them offered all the necessary information about the engine status. An additional clock was mounted in the middle of the dashboard over a center-stack, which was another element that was uncommon for the cars from that era.

The engine was an inline-six unit fed by three carburetors and it produced 286 hp. In 1964, the DB5 Vantage engine was reworked and improved do offer 330 hp. First models were fitted with a 4-speed manual, but they were changed later on with a 5-speed. A 3-speed automatic was on the options list.