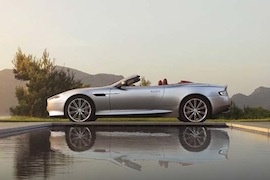 The 2013 Aston Martin DB9 Volante helped to add more shine to the British brand with the open-top version of the DB9 Coupe.
Since its launch, the DB9 was available in both versions of the Coupe and the Volante, where the Volante was the name for convertible vehicles in the Aston Martin terminology.

The vehicle had a low profile, flat and long hood and a raked reinforced windshield that was needed to pass the roll-over tests. For the 2013 model, the DB9 received a bigger grille, new LED daytime running lights, and a light bar on the fenders, on top of the side vents. The headlights were bi-xenon fitted as standard. In the rear, the taillights received a white and clear glass on the lower side. The diffuser was enhanced as well, to accomplish the styling of the open-top Gran tourer.

Inside, there were four seats available even though most probably only the front seats might be used properly. The center console featured aluminum and piano-black surfaces. The infotainment screen was retractable under a lid flush to the upper part of the console.

Under the hood, there was a new AM11 V12 engine that featured a revised block and new head, including dual variable valve timing. A new adaptive suspension was fitted for better cornering speed. Last, but not least, the carbo-ceramic brakes were added to the list. 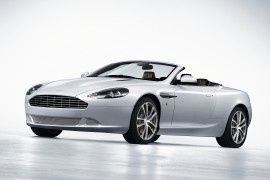 Aston Martin heavily improved the open-top version of the DB9 in 2010, seven years after the model introduction, and first after the split from Ford Motor Company.
Designed to compete on the GT market, the DB9 and its open-top companion, the DB9 Volante, came on the market in 2003, and the original design belonged to Ian Callum and Henrik Fisker. In 2007, a consortium led by David Richards bought Aston Martin from Ford. Richards was Prodrive’s CEO, a small company specialized in motorsport. He managed to improve and promote the company in unusual methods. In the end, the DB9 was the best-selling Aston Martin of all times to that date.

The refreshed DB9 Volante showed minimal differences when compared to the 2003 model. At the front, Marek Reichman (the new designer) covered the front lower grille and side scoops with a hexagonal mesh. In the back, he also changed the red taillights with clear-lenses ones. The DB9 Volante kept its retractable hood since it was one of the fastest on the market. The driver could retract the rag-top in a mere 17 seconds.

Inside, the most significant change was on the lower side of the center stack. Aston Martin installed a new phone connection in the center console for better live-stream music.

But the most significant changes were on the technical side. While the 2003 version featured a soft suspension that spoiled the driving pleasure, the 2010 model came fitted with an adaptive system. Aston Martin installed a new six-speed automatic transmission for the drivetrain as an option, which provided similar performances as the manual version. Moreover, the British car manufacturer managed to get the DB9 Volante within the Euro 5 limits and lowered its emission while keeping the same power. 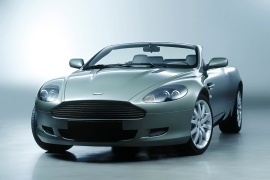 The DB9 Volante was launched at the North American International Auto Show in late 2004.
It was the 13th convertible built by the British car-maker.

The car came on the market after the DB7. Following the naming tradition, it should have been named DB8 but the car-maker was afraid that the customers will think that it had a V8 under the hood. Actually, it was a V12 taken from the Aston Martin Vanquish. It was hand-built at Aston Martin Gaydon, alongside the coupe.

The car was a step above the DB7 with a more aerodynamic look, but it still featured the classic Aston Martin “shell” grille. The roof was operated by the push of a button and it took just 17 seconds to disappear. When down, it folded behind a hardcover flush with the DB9’s bodywork.

Inside, the DB9 featured a luxurious interior covered in leather, aluminum, and wood. The latter was used in two places only: on top of the center of the dashboard and, as an option, for the door caps. The brushed aluminum pedals were part of the sporty image. Despite having a folding roof, the DB9 Volante featured a 2+2 seating configuration.

Like the Aston Martin Vanquish, the DB9 featured a 5.9-liter V12 engine. While the engine was in the front, the gearbox was in the back for better weight distribution. It was fitted with a standard 6-speed manual, but there was an option for a 6-speed automatic.