The 2014 Aston Martin Vantage S Roadster came one year after the Vantage S Coupe.
It was the fast version of a GT, a true contender for Ferrari.

The Vantage S Roadster was the most powerful and the fastest roadster ever produced by Aston Martin. It followed the path of the Vantage S, using the same engine and gearbox, but with an open-top, few pounds extra and unlimited headroom.

The exterior look featured long air vents on the hood, as a statement of extra cooling needed for the big, powerful engine under
the hood. The large, typical Aston Martin grille looked more like an open mouth with the black mesh on it. The carbon fiber elements on the bodywork only made the car look meaner, even though the brand itself was an elegant, yet sporty, one.

The interior was a combination of luxury and sports cars. The sport bucket seats covered in leather with contrast stitches gave a special sense of luxury. On the center console, in the middle of it, there was the key slot where the key-fob had to be inserted. Since the Vantage S Roadster featured the same seven-speed automated gearbox, there were only few buttons to control it and two large paddle-shifters behind the steering wheel to use it properly.

On the center console, between the seats, there was the “sport” button which adjusted the settings for the engine, suspension, gearbox, and steering. At the end of the day, the Aston Martin Vantage S Roadster had more in common with a true sports car than with an open-top Grand Tourer. 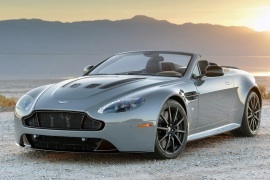