Audi refreshed the first-generation of the A5 Sportback in 2011 and introduced several compact-sized four-door coupe improvements.
In the late ’70s, Audi used to have fastback versions for its cars, named “Avant.” Over time, the carmaker abandoned that shape and used the name only for station wagons. But as the trend returned to the sloped ends, which were now called four-door coupes, the German carmaker created a new name for it: Sportback.

The overall shape of the A5 Sportback was kept and followed the same proportions, but the details brought more appeal for the customers. Its sharper headlights and LED daytime running lights were more refined. The singleframe grille design signature increased in size and sported the piano-black look, regardless of the car’s color. Audi design team reshaped the LED taillights in the rear and created a thin, crisp lines signature pattern element.

Inside, there was a new design for the dashboard. While Audi kept the overall shape, it changed the instrument panel and the multi-media interface (MMI). Its new dials featured a crisp design with more prominent lettering. Audi moved the volume turning knob for the infotainment system from the center stack to the center console, next to the driver, while the MMI controls found a new home behind the gear-stick, closer to the center armrest.

Audi installed four turbo-diesel and three turbocharged gasoline units in the lineup. All engines featured direct fuel injection that increased the fuel-efficiency. The engineers integrated the start-stop system on all versions. 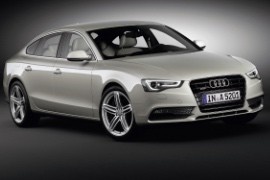