Part of a multi-billion investment into battery powered vehicles, the Audi e-tron Sportback is Ingolstadt’s second electric SUV and the second production model from its continuously expanding e-tron product line.
Essentially, the model is a so-called “four-door coupe” version of the e-tron, which is a more traditional looking electric SUV. Coincidentally, the regular e-tron is already based on a more coupe-like SUV, the Audi Q8, but the e-tron Sportback takes that coupe-look even further.

While the standard e-tron goes head-to-head with the Mercedes-Benz EQC and the BMW iX3, the Audi e-tron Sportback doesn’t have a direct rival and is simply a more stylish alternative to any other electric SUV. The technical bits are largely identical between the two e-trons, but there are some performance and energy advantages on the Sportback’s side thanks to its more aerodynamic exterior shape. In fact, the coupe-like body shape gives it a drag coefficient of just 0.25, almost as good as an aerodynamic sedan. Apparently, the improved aero alone gives the Sportback 10 km (6.2 miles) of more range compared to the normal e-tron. The sporty SUV has a range of up to 446 kilometers (277.1 miles) in the WLTP cycle, despite taking its electric juice from an identical, 95 kWh Lithium-ion battery. 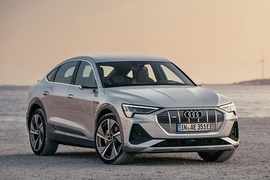