Audi chased a specific niche on the market: the luxury supercar.
Vehicles that offered a good balance between comfort and performance. And when it achieved that with the R8, it chopped the roof off and made it a roadster.

Most of the road performance vehicles are supercars. Those are nice to drive from time to time, but hard to use on a daily drive. The other choice was a GT car, which could provide plenty of comfort and luxury and good performance. The R8 slotted in between those two. It wasn’t that slow as a GT and not as uncomfortable as a regular supercar. Since the Volkswagen Group already had GT vehicles from Bentley and supercars from Lamborghini, the Audi had to fill the gap between them.

The open-top R8 received an update in 2018. It featured the same design up to the A-pillars with a low profile and short front hood that could be used for some small items. The roof could have been retracted by pressing the key-fob unlock button twice and holding it down. Another 20 seconds and the roof folded down behind the cabin.

Inside, most of the buttons and levers were carried over from other Audi models. Even the rotary control command for the MMI infotainment unit was from the other models. But the R8 Spyder didn’t feature an infotainment screen on the center stack. It was only shown to the driver in the Audi Virtual Cockpit.

Under the hood, there was the same V10 5.2-liter Lamborghini engine. It was available in two power outputs. Both mated to a 7-speed S-Tronic gearbox. As usual, the R8 was offered only with the all-wheel-drive quattro system. 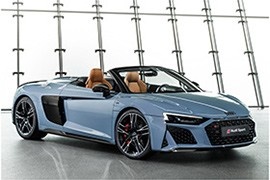