The mid-cycle refresh of the second-generation Audi R8 is not exactly in line with other Audi facelift, since the differences between the old and the new are rather extensive, both on the technical and the visual side.
On the outside, it’s the front end that got the biggest nips and tucks, with the lower fascia now looking more in line with that of the 2018 Audi RS5 and other upcoming RS models.
Both versions of the naturally aspirated 5.2-liter V10 have been improved, with the regular R8 V10 Coupe now delivering 570 horsepower instead of 540 and the R8 V10 Coupe Performance (renamed from V10 Plus) offering 620 horsepower instead of the puny 610 horsepower of its predecessor. A comprehensive redesign of the brakes has improved stopping power on both versions as well.
In 2018, Audi released its first rear-wheel-drive R8, thus the Coupe became the cheapest version of the R8. While cheaper, the car’s weight was also reduced due to the absence of the extra differentials and shafts. The weight was reduced by 40 kg.
The R8 came with standard 19-inch alloys and offered optional ultralight 20-inch milled wheels. Instead of the standard steel discs, customers could opt for ceramic brake discs.
The 2018 model started selling in 2019. 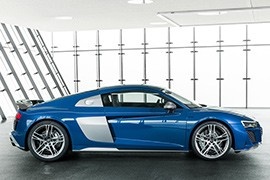