The first of its kind, with no direct or indirect predecessor, the Audi RS Q8 was launched with a real bang in 2019, not long after a pre-production prototype of the car apparently became the quickest SUV to ever lap the Nurburgring Nordschleife.
Essentially a four-door “coupe” version of the Q7, the Audi Q8 was the first of the two models to receive an Audi Sport, RS version.

The Audi RS Q8 is powered by a mild-hybrid, twin-turbocharged, 4.0-liter V8 that delivers no less that 600 horsepower and 800 Nm (590 lb-ft) of torque. Sent to all four wheels through a quattro all-wheel-drive system and an eight-speed automatic transmission, all that power is apparently enough for the RS Q8 to accelerate from 0 to 100 kph (62 mph) in just 3.8 seconds, from 0 to 200 kph (124 mph) in 13.7 seconds, and then onward to an electronically limited top speed of 250 kph (155 mph). The mild-hybrid system is based on a 48-volt electric architecture and can regenerate up to 12 Kw of power during deceleration, storing the accumulated energy in a small lithium-ion battery. That energy is enough for the crossover to coast for up to 40 seconds with the internal combustion turned off or supplement the internal combustion engine during acceleration or at lower revs. 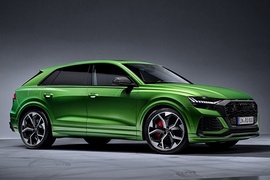