The RS7 Sportback might be the answer for those who want RS6 Avant performance, but they appreciate a coupe-like bodywork more than the sleeper look of a station wagon.
This is why Audi dropped the RS6 powerplant under the hood of the A7 and the result is the RS7 Sportback.

The RS7 is 40 mm (1.6 inches) wider than its non-RS sibling, the A7 Sportback. Actually, only the hood, the front doors, and the tailgate are the same body panels. Every other part is different and the total length now sits at 5 meters (197.2 in).

Upfront, over the redesigned front bumper, we can standard LED headlights, which can be improved with a pair of RS matrix laser headlights, with dark bezels. Of course, the taillights are also full-LED. At the rear, under the redesigned bumper, there is one oval exhaust tip on each side, marking the sporty character of the RS7. The rear spoiler installed on the tailgate raises up automatically above 100 kph (62 mph), or can be moved up or down from a touch of a button.

The engine is the same 4.0-liter V8 from the RS6 Avant and offers a mild-hybrid system with a belt-driven starter generator. The total output is 600 hp and 800 Nm (590 lb-ft) of torque. The energy is sent to the all-wheel-drive system via an 8-speed automatic gearbox. The traction is based on a fully mechanical center differential, which sends torque to the front and rear axles spread in a 40:60 ratio. The 0 to 100 kph (0-62 mph) sprint is completed in 3.6 seconds, and the top speed is 305 kph (189.5 mph). 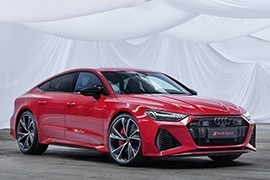