Based on the regular Audi Q5, the SQ version was the most powerful version for the German compact SUV on the market.
The compact-SUV premium segment evolved, and customers started to ask more from their vehicles. Soon, the manufacturers began to give them what they wanted. Mercedes-Benz introduced an AMG version for the GLC, BMW brought the X3M40d, Jaguar came up with the F-Pace R, and Audi put the S before the Q.
Unlike its main rivals, Audi was the only one to offer the sportiest version of its compact SUV only with a diesel engine.

From the outside, the SQ5 looked almost like a regular Q5 with an S-Line package. There was a different front bumper with larger air intakes and big side-scoops. The “singleframe” design concept brought a massive grille at the front covering almost the entire area between the hood and the lower side of the bumper. Like any other S version, it featured silver casings for the door-mirrors. At the back, the designers installed four chromed oval exhausts.

For the interior, Audi already offered various trim-packages for the Q5, but the SQ5 was fitted with more standard features. The bucket-seats with high bolstering provided comfort and side-support for fast cornering. Like its siblings, it featured the Audi Virtual Cockpit TFT display in the instrument cluster and the big infotainment unit placed on top of the dashboard. The flat-bottom steering wheel was enhanced with the SQ5 badge on it. An aluminum-look trim on the center console and door panels improved the sporty look of the interior.

Under the hood, Audi installed a 3.0 V6 diesel engine. Apart from the turbocharger, the carmaker installed an electric-powered compressor (EPC), which builds pressure faster with an electric, 48v, motor. 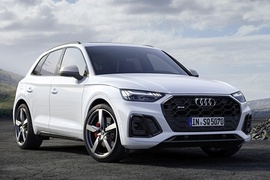