In 2018, Audi introduced a facelift for its third generation of the TT range, including the coupe and the roadster versions.
The improvements went on more areas, and some minor changes were made for the exterior.

The exterior has been changed discretely and brought a new three-dimensional Singleframe radiator grille design and larger side air inlets. The new, optional, S line exterior package underscored the sporty character of the car. It included a full-length front splitter, a radiator grille in titanium black, and specific side sills with inserts as well as a sporty rear end. A wider diffuser was added to the back.

Inside, the driver had the Audi Virtual Cockpit, which featured an additional sport display, providing information on engine output, torque, and g forces. Inside the air-vents from the central part of the dashboard, the designers installed displays for temperature, air-flow, and fan speed. A nice space-saving method. The infotainment system, named MMI, was simplified and it featured just six key-buttons on the center console, between the front seats. It integrated a touch-pad on top of the rotary knob. Due to its retractable roof, the trunk space was smaller than the one in the coupe version. It only offered 280 liters (9.9 cu-ft) of space.

The 2018 model was fitted with the same 2.0-liter turbocharged engine and three power choices. It was mated with either a 6-speed manual or a 7-speed S-Tronic. A special version, TT RS, was offered with a 2.5-liter unit mated to a standard dual-clutch automatic gearbox. 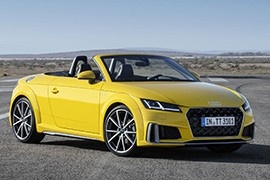