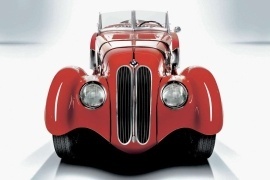 A long hood with two flared arches and a pair of headlights that were incorporated into the flowing design of the car was unusual for 1936. The slim and tall “BMW-Kidney” grille was already a brand image both on the tracks and on the streets. The short cockpit was for two passengers and the half-doors were there only to pass the regulations. The rear wheels were covered by flared and extended wheel-arches. Between them, the sloped trunk host the spare-wheel on top of it when the car was used on the streets. In the race, the competitors used to remove the fenders to lighten the car and the spare-wheel for the same reason.

The chassis featured an elliptical profile to decrease weight and increase strength. The excellent handling of the car came from its low weight of 830 kg (1830 lbs), front swing axle with a transverse leaf spring and the rear live axle. The inline-six engine was similar to the one found in the BMW 326 and 327 but featured a different cylinder head and three down-drought carburetors. That setup allowed the car to obtain 80 hp from the 2.0-liter engine. It was mated to a 4-speed gearbox. Depending on the race, the axle final drive ratio could have been changed either for acceleration or for higher speeds.