While the 3 Series was reserved for the four-door sedan version, the Coupe was renamed as the 4-Series.
It was the BMW strategy to enhance its lineup, and it worked.

For the 2020 model year, BMW introduced a completely new 4-series in June 2020. It was based on the 2019 concept-car showed in September 2019 at Frankfurt Motor Show, one of the last important motor shows before the pandemic started.

The 4-Series was a shocking appearance with its kidney-grille, which got bigger and covered the front fascia’s middle side from the bottom of the apron to the hood. It was huge! On the sides of the front bumper, BMW installed a pair of vents to cool the brakes. BMW opted for standard LED units for the headlights, while the laser ones were on the options list. The sculptured door panels and the raked C-pillars resembled the silhouette of the BMW 8-Series. Dual exhaust was installed in the back, with a three-slats splitter in the middle.

BMW offered the 4 Series with a power output between 184 and 374 hp, with rear- or all-wheel-drive. All versions were paired with an 8-speed automatic gearbox. The diesel versions were fitted to a mild-hybrid system to achieve better fuel efficiency and to lower CO2 emissions. 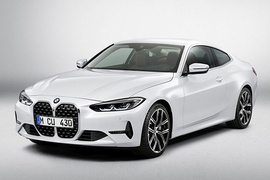