BMW raised the electric vehicles’ standards and showed the electric-car industry how a proper sports sedan should be built when it introduced the i4 in 2021.
While Tesla was getting more attention than anyone else when it came to electric vehicles, BMW was in its lab working on a new car. Its engineers were not concerned about what other carmakers could achieve and how fast they could reach the 60-mile mark (92 kph) from standing still. With a huge experience in car building and intensive testings for the powertrain, it delivered the i4.

It used the same platform as the 4 Series to cut its costs, and it showed the same tall grille considered by some as “Bugs Bunny teeth” while others remembered that BMW wore the tall and narrow kidney-grille since the 30’s. Its angular LED headlights and the wide black area in the front apron revealed an aggressive, sporty styling. From its sides, the four-door fastback styling resembled the X4 look, but in street clothes and lower ground clearance.

Inside, the carmaker made the decisive step toward the digital revolution and deleted all analog instruments inside the cabin. The instrument panel and the touch-screen for the infotainment unit shared the same long panel spread across 60% of the dashboard. But the carmaker didn’t delete some physical buttons and controls.

For the powertrain, BMW charged with an all-wheel-drive electric system that provided 530 hp. Thus, it allowed the new i4 to beat the 0 to 60 mph (0-92 kph) time in less than four seconds. The carmaker promised more than 300 miles (482 km) according to the EPA tests or around 350 miles (590 km) in WLTP European tests. 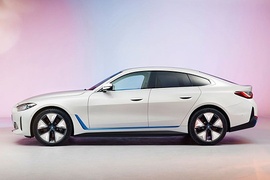