The 2003 BMW M3 CSL was a special series, built on the basis of those three letters, which meant “Coupe, Sports, Lightweight”.
It was an homage to the glorious 1972 BMW 3.0 CSL.

The “Coupe Sport Leichtbau” (Coupe, Sports, Lightweight) were the basic characteristics of the CSL models. The engineers took the standard vehicle and removed whatever they could to make the car lighter. After that, they replaced the body panels with lighter ones. The M3 CSL was produced only one year in a total number of 1383 units.

From the outside, only a car enthusiast would tell the difference, but a bigger bumper in the front and a duck-type rear spoiler on the trunk lid were noticeable. A special set of wheels was offered especially for the CSL model. Some small “CSL” badges were installed on the front fenders on the exhaust grilles and one in the back. On the lower part of the front apron, there were some carbon-fiber elements.

Inside, the heavier front seats of the standard M3 were replaced with slimmer and lighter ones. They were mostly race-bucket seats with different upholstery. The rear bench was slimmer as well and featured a simple mechanism to take them out. Just in case the driver needs to go racing.

Under the hood there was an enhanced version of the 3.2-liter straight-six engine from the regular M3, but with more power. A standard SMG II (automated, single-clutch, gearbox) was fitted as standard. Also standard was the limited-slip differential. Due to all weight reductions it had, the car was lighter by 110 kg (243 lbs) than the standard M3 coupe. 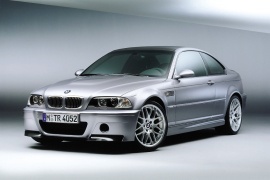