BMW M relentlessly tried to make its cars quicker and faster than its competitors, and the CS versions were even wilder.
When you lock a car-maniac into its room due to a world pandemic situation, all they had to do was think about how to make a car faster. Maybe exactly that happened to the BMW M engineers, who had to work from home in the infamous year 2020. Unlike the rest of us, who wore out the TV remote controller and made a new couch to look like it was older than the house itself, they prepared an outrageous vehicle: the M5 CS.

Forget about the heavy, regular M5 (which was already a fast car) and look at the front, yellow, daytime running lights. We would name them “angel eyes” like anyone else, but we are afraid not to be banned forever from Heaven. They looked from the dark side. The grille was not tall, like on the M4, but shorter and above the sculptured bumpers that sported a lower grille and two side-scoops (functional). A carbon-fiber splitter helped to reduce the ground effect at higher speeds. BMW M made the hood and other parts from carbon-fiber-reinforced plastic (CFRP). Some elements were left unpainted. Why bother? They looked better that way. Through the standard, 20” light-alloy-wheels, the car sported the red calipers.

Inside, the carmaker dropped the 5-seat option and installed four M Carbon sport-bucket seats. At the front, the integrated headrests sported illuminated M5 logos and displayed the outline of the Nurburgring race-track. Behind the steering wheel, the engineers installed two carbon-fiber paddle-shifters for the 8-speed automatic M Steptronic gearbox. Inside the instrument cluster, there was no dial or gauge: just a wide digital customizable display.

Under the hood, M engineers dropped the most powerful engine ever installed in a BMW. The 4.4-liter twin-turbo V8 provided 635 hp, which were sent in all corners. Like its non-CS brother, it was able to send all the torque to the rear wheels for spectacular drifts. 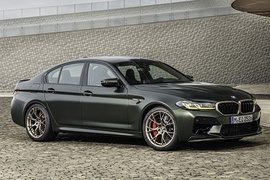