Unveiled alongside the M8 Coupe, the first ever BMW M8 Convertible is powered by the same engine, which was borrowed straight from the fastest sedan in the BMW lineup, the M5.
Just like in its coupe brother, the 4.4-liter, twin-turbocharged V8 develops 600 horsepower and 750 Nm of torque in the base model and 625 horsepower in the M8 Convertible Competition version, which are identical numbers with the M5 donor.

Also shared with the M8 Coupe and taken straight out of the M5 is the M xDrive all-wheel-drive system with a rear-based setup and Active M Differential, sending the power to either all four wheels or just the rear ones via a ZF-sourced eight-speed automatic gearbox. Ina similar fashion to its brothers the M8 Convertible can be driven either in the default 4WD setting or 4WD Sport mode, which sends a lot more power to the rear wheels. When the DSC (Dynamic Stability Control) is deactivated, the model becomes a pure 2WD car. The standard M8 Convertible can go from 0 to 100 kph (62 mph) in 3.4 seconds, while the 200 kph (124 mph) speed is clocked in 11.3 seconds. The M8 Convertible Competition is slightly faster, with the 0-100 kph time taking 3.3 seconds and 200 kph being reached in 11.1 seconds. 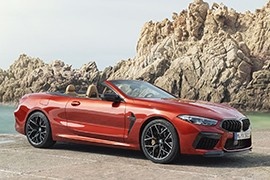