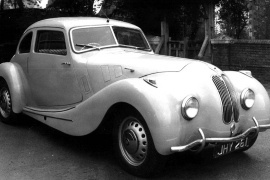 After WWII, the Bristol Aeroplane Company created a car division, bought a license from Frazer Nash, and started producing pre-war BMWs under its badge.
Bristol didn’t have the know-how on cars, but it knew how to use light alloys. It also lacked the technology for building a car engine. Thanks to its connections with the British army, Bristol was granted to receive refunds for the war effort, got the plans for the BMW 327, and hired the German carmaker’s former chief engineer, Dr. Fritz Fiedler.

The British carmaker followed the original plans but replaced the materials. It even kept the BMW kidney-grille at the front but replaced the round badge with the Bristol one. Bristol built the doors, hood, and trunk from aluminum and moved the spare wheel inside the luggage compartment for a sleeker, more aerodynamic shape. For the second series, between 1948 and 1950, the 400 had the spare wheel on the lid, like the original BMW 327. Both versions sported rear-hinged doors, and it was available only as a coupe.

Inside, the dashboard was redesigned in an aviation-specific layout, with the oil-pressure gauge placed in front of the driver. That was considered by Bristol as the most important gauge. It mounted the speedometer and tachometer in the middle, flanking the ignition key and the ammeter.

Under the hood, Bristol installed BMW’s 2.0-liter inline-six engine. Three Solex carburetors fed it, and it featured a hemispherical combustion chamber, which was later on known as a Hemi-engine.